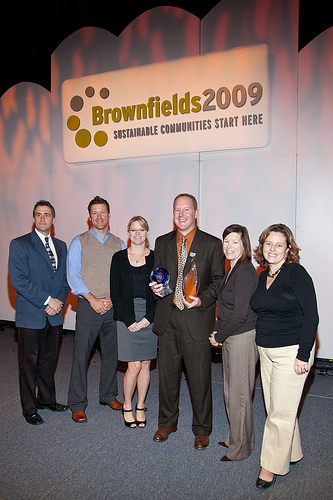 Sigma was a strategic partner to the City of Milwaukee which received a 2009 Phoenix Award for Region 5 by the The Phoenix Awards Institute, Inc., an environmental and service nonprofit organization, dedicated to honoring the groups that remediate and redevelop brownfield sites. Sigma and its partners received the award for its work on the Menomonee Valley Industrial Center & Community Park, Milwaukee, WI.

The Phoenix Awards Institute, Inc. recognizes the men and women who use innovative solutions with revitalization projects that transform blighted sites into new significant community assets. The Phoenix Awards showcase these winning techniques and publicize these premier redevelopment projects as models for other communities around the world.

These awards were established in 1997 and are awarded annually. In 2000, the award program became part of the National Brownfields Conference sponsored by U.S. EPA, ICMA and many other partners and sponsors. A call for nominations begins January 1st and closes June 30th each year. Winners are selected on an annual basis.