Home/Uncategorized, UnlistedPages/Metal Can Facility
Previous Next

During construction of a drum storage room in 1989, solvent odors were detected inside the facility building. Through soil sampling and analysis, plant personnel confirmed the release of chlorinated and petroleum solvents. A trench was excavated to remove the accessible soil impacts. Subsequent investigation and remedial efforts were focused on addressing the source area and consisted of soil vapor extraction and groundwater pumping and treatment systems.

In 2004, The Sigma Group was retained as a subconsultant to assist in addressing the groundwater plume and off-site delineation. A thorough review of the existing database was completed and a pilot test was performed in 2005 to evaluate the effectiveness of vapor extraction/air sparging and enhanced bioremediation to address the groundwater impacts and position the site for closure. 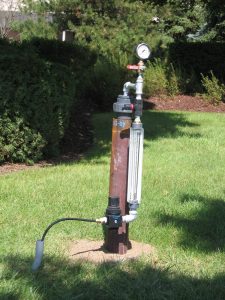 About the Author: The Sigma Group