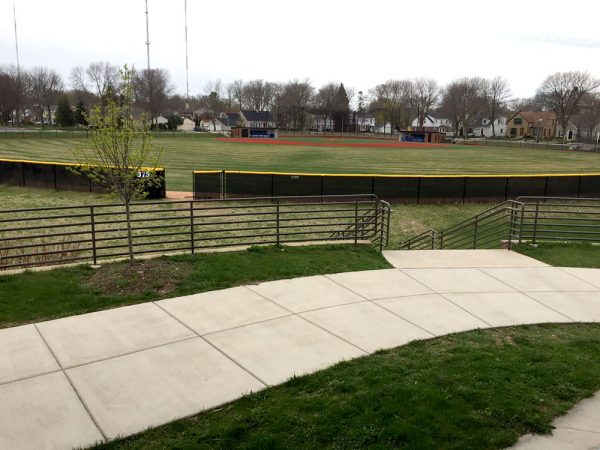 The Cahill Park Project was completed in 2013 with two major objectives. The first was to incorporate a stormwater facility within the park to help alleviate flooding within the Village’s south drainage basin. The second objective was to create a park with as much usable space as possible while restoring the existing ball field as a facility inspiring community pride. The Village was able to accomplish both of these tasks by working closely with GAI Consultants, Whitefish Bay High School and Friends of Bay Baseball.

Planning of the project began in 2010 with a study determining the feasibility of utilizing Cahill Park as a dual purpose flood storage facility while maintaining the ball field and other park features. The plan was then developed over 2011 and 2012 and the Village and GAI consultants were able to secure FEMA grant money to cover the flood protection aspect of the project. In April 2013, Cahill Park Improvements were awarded to H&H Civil Construction to turn the plan into reality. Construction began in the spring of 2013 and by the fall of 2013 the transformation of Cahill Park was complete. Cahill Park and the ball field were ready for full use in the spring of 2014.

With major flooding within the Village due to intense rain events in recent years, it was decided to construct a stormwater facility as one step in a process to help alleviate the flooding. With limited sites available, Cahill Park was chosen as the site to build the stormwater facility. The facility was designed to not only serve as a detention basin for storm water during large rain events, but also during small rain events the park and open space shall be usable to the public. The drain down time of the storage area is anywhere from two hours to 24 hours based on the rain event.

Some of the aspects of the stormwater facility within the park include: